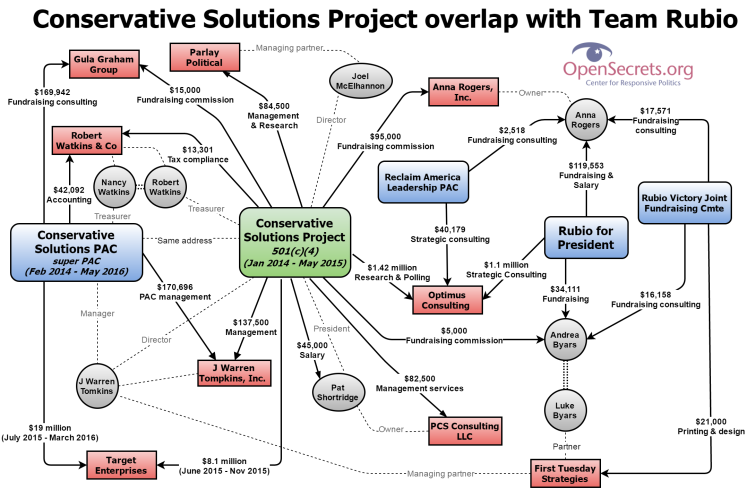 I had the opportunity to co-author a new OpenSecretsBlog post at the Center for Responsive Politics. The post outlines how recent tax filings we obtained reveal new ties between Conservative Solutions Project and a network of groups connected to Rubio’s campaign.

Here’s a few highlights from the report:

CSP spent over $8 million on political ads —  running 12% of all dark money ads in the 2016 election cycle, which makes it the second biggest advertiser running TV political ads last year next to Jeb Bush’s Right to Rise super PAC.

UPDATE: Marco Rubio commented on the $13.5 million donor in an interview with Alex Leary, Washington Bureau Chief of the Tampa Bay Times.

“They can’t run ads saying, ‘Vote for Marco Rubio.’ They just can’t. I know they ran ads because I saw them on TV and they were nice and they were good,” Rubio told the Tampa Bay Times. “But I had nothing to do with it.”

Still, what about the fact that someone gave so much and their identity may never become public?

“For me, it’s irrelevant because as far as I’m concerned, if someone decides to be helpful, they are buying into my agenda,” Rubio said.